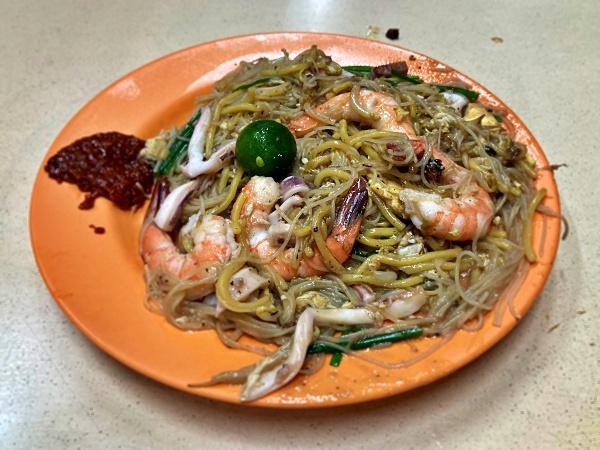 I have always wanted to go to this coffee shop after seeing it on Parts Unknown with the late Anthony Bourdain. While he didn’t eat the hokkien mee, I was intrigued as I live close to the Lorong 29 Hokkien Mee on east coast road run by Alex See and had read that this stall was run by his younger brother Hock Siong. If this hokkien mee was anywhere near as good as the one on east coast rd, then I would be in for a treat.

Both these stalls cook their dishes the old fashioned way using charcoal, imparting a wonderful smokey flavour into the dish hokkien mee. The quality of the seafood stands out, especially the sotong which really absorbs the smoke from the charcoal. I normally prefer my hokkien mee to be the wetter style, but this dish is pretty fantastic. Every mouthful oozes a sinful pork lard coated flavour that can’t be beat. You probably wouldn’t want to eat this too often, but hey its good to treat yourself once in a while. The sambal is also devine, sweet and spicy enough to cut through the smokiness, especially when combined with some acidity from the calamansi juice. This is definitely an old school hokkien mee that should be on everyone’s todo list. I wouldn’t be brave enough to say it aloud, but I will whisper it “and I dare say it might just edge out his brothers down on east coast road”.