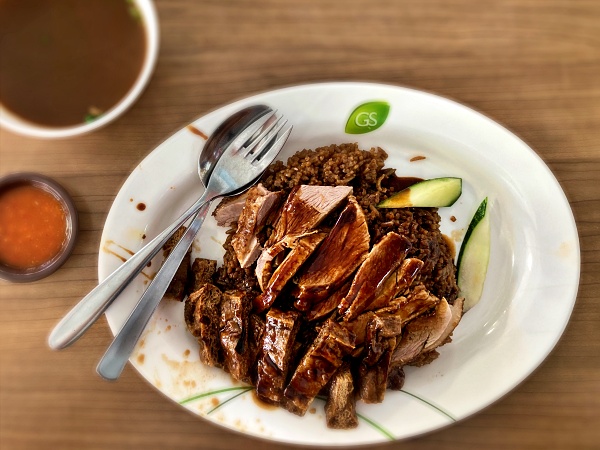 Reluctantly, I found myself back again, and hungry, at the marine parade food centre. For reasons I have previously stated, its easily the worst food centre in the east. I now only go makan here when strictly necessary. Today was one of those days. To offset this I thought I should try something that was popular amongst the people, a chance of some food which might make me feel more positive about this place. So contrary to my natural instincts (I hate queuing), I walked a lap and chose the stall with the longest queue. Today this happened to be the stall Kun Ji Duck Rice. 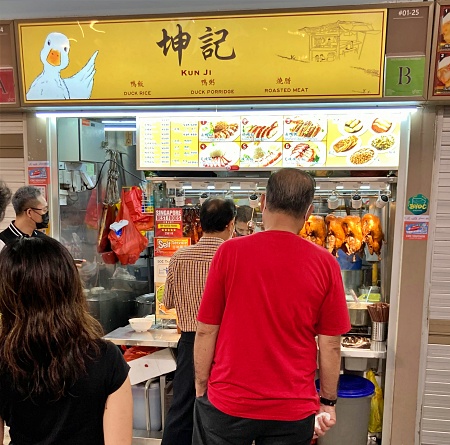 Now while I hate queues, I do greatly appreciate stalls that increase productivity to reduce waiting times. Kun Ji has got this down to an art form - the key is to keep people moving and not standing around too long. Multiple people working at the stall all had their defined roles. The queue moved briskly. In fact, faster than I expected, forcing me to make up my mind before I was even ready. As it was the first time at this store I went with the first dish (number 1) on the banner, braised duck rice. To help justify the fact I queued at all, I added some braised tau pok into the mix.

First off, the portion size was probably the most generous portion of roast meats I have ever gotten. The duck itself was tender and deliciously juicy. Duck has always been my favourite poultry no question. Sadly, I wasn’t sold on the braising sauce, which was a little bland for my palate. I would have preferred some stronger flavours and more salt.

The grains of rice were quite small, perhaps having been broken up. The smaller grains soaked up so much of the braising sauce, it was a stroke of genius (I really wish I liked the sauce more!). The tau pok was also decent, but then tau pok is hard to stuff up. The other star of the dish was the soup, a rich dark duck flavoured broth. What could go wrong.

Would I queue up for this again? I think it would depend on the size of the queue. Maybe next time I will just ask for an extra serving of duck.