After living in Singapore for two years, and visiting for over 10 years, I have never eaten “western” food from a hawker centre. Why? Well my attitude was that I didn’t come to Singapore to eat food I can get back in Australia. But today I finally cracked and thought I should give the chop trinity a go (chicken, pork, lamb). I had been reading about the history of the Hainanese in Singapore and how working humbly as cooks in European households evolved into opening kopitiams and cooking the western recipes learnt for the masses.

On the recommendation of a friend, Western Barbeque was the stall that I should break my cherry with and tonight I just happened to find myself near Old Airport Rd. According to its website it has been around since 1974, so it has staying power, which is mighty impressive in the cut-throat Singapore F&B scene.

As recommended, I went for the mixed grill. It consists of a piece of each chicken chop, pork chop, and lamb chop, a fried egg, some crinkle cut chips, and coleslaw. In Australia, when the word chop is used in terms of meat, it usually means the meat that surrounds the ribs, with each rib cut into an individual portion. In Singapore it just seems to means a portion of meat chopped off th body? Anyway the meat was ok. The pork chop seemed like it was thinner than a banknote, but I can’t complain for $10 for 3 pieces of protein. I did not understand the hype about the special garlic sauce either, to me it didn’t seem that special or garlicy. Would I order it again? No. Probably because I grew up in a city where I could get a decent $5 steak down the pub, I think its a mental thing for me. But I appreciate its there and that people do enjoy it. If you’re into western hawker food, perhaps you can tell me if this is one of the best?

At the moment there is also a visual art performance streamed onto the side of the hawker centre which gives you some nice visuals while you eat. Check it out while it is still around. 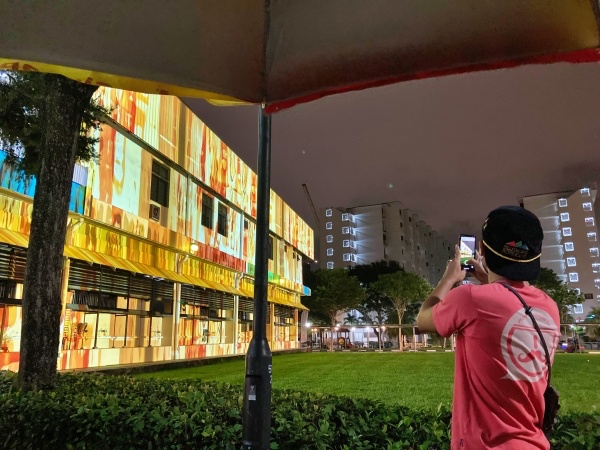 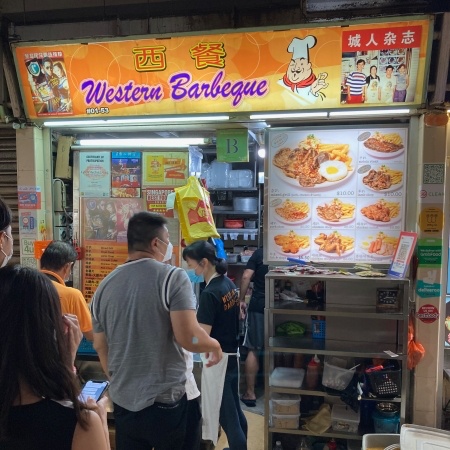