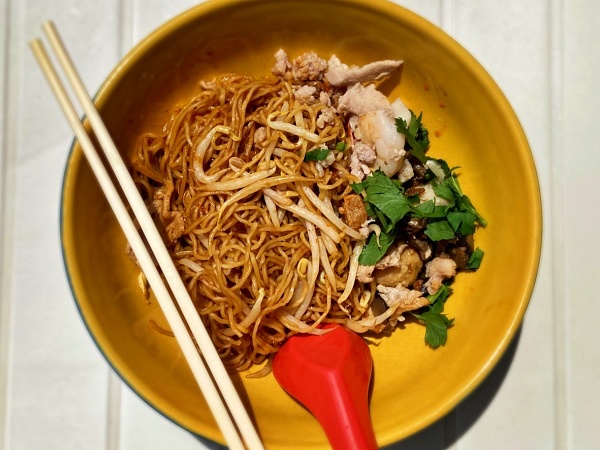 As a standard rule, I rarely tapow hawker food. I feel it degrades every minute you keep it in a takeaway container. The majority of the dishes are made to be eaten just after they are cooked. But I have to make an exception in this Covid times, no choice but to tapow.

Grandfather bak chor mee is a new stall in Siglap at the LTN kopitiam. I saw them redesigning it (it had been empty for a while) and waited patiently for it to open. There are limited bak chor mee options around the area and it is one of my favourite dishes. The “grandfather”, Mr Kodo, has another stall at Jalan Tua Kong selling carrot cake. I have fond memories of buying this carrot cake during the first CB and he gave me a cold can of tiger beer at 8:30am while I waited. Great way to start the day.

Uniquely for the area, he as a sign that offers free food to those in need. How many people take him up on that I do not know. Clearly the guy is quite generous and endeavours to help his community out.

Grandfather’s back chor mee is absolutely delicious. Packed full of ingredients; prawn, fish dumpling, pork balls, marinated sliced pork, minced pork, crunchy bean sprouts, and generous amounts of lard. I chose mee kia to have with my bak chor mee, other options were mee pok, kway teow, and mee tai mak. The herbaceous tomato based chilli sauce is not for the faint hearted, but it is balanced out with the vinegar and earthiness of the mushroom sauce. Maybe it was a little bit oily, but that’s probably more to do with sweating in a plastic container as I cycled home than anything.

My favourite bak chor mee in the east just got a new champion. The price is higher than some, but the plethora of ingredients justifies it, I just wish there was some pork liver included.

Editor’s Note: After purchasing several times, I feel the newness of the shop means they have not quite got their consistency down just quite yet. Each time I get a bowl it tastes slightly different. But that should come with time. 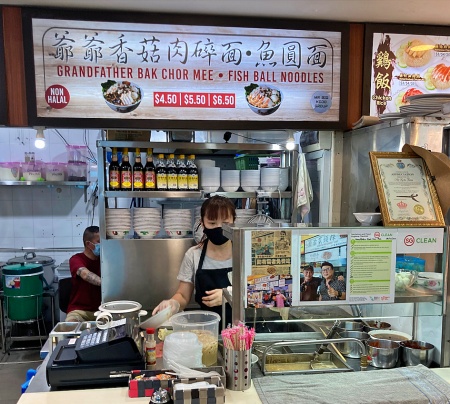