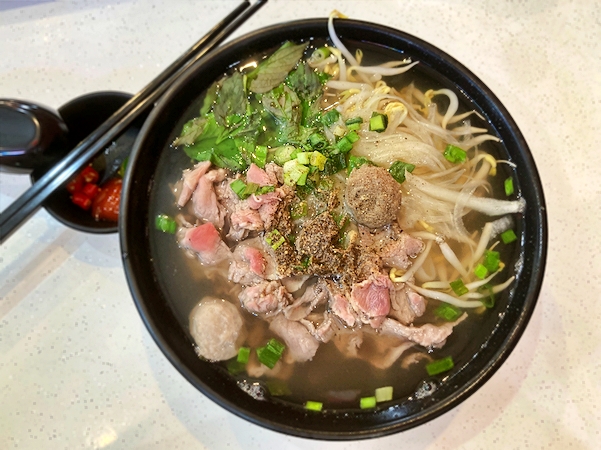 There is something about cold rainy days that can make your stomach yearn for a hot noodle soup. While the term “cold” in Singapore can be subjective, the recent bout of gloomy, overcast skies, combined with constant rain does give off the impression of winter.

On a recent adventure around the neighbourhood I noticed that a local coffee shop seemed to have changed hands, and a new Vietnamese stall had surfaced. Vietnamese food has always been one of my favourite cuisines. The star of vietnamese cuisine, imo, is pho. A soup that somehow feels clean, rich, healthy, and oily all at the same time. Comfort food. Growing up in Australia, and thanks to immigration, there are a lot of great vietnamese restaurants in every capital city. In fact, and this maybe considered blasphemous, I favourably compare much of the vietnamese food in Australia to what you can get in Ho Chi Minh City. Hanoi is different, in that the regional style of northern vietnamese food is not commonly found in Australia.

Therefore, I was excited to see pho bo (beef pho) on the menu at Saigon Legend. The stall is run by a Vietnamese guy, which helps me having a picture menu. In fact he offers a variety of vietnamese dishes (32 items!), from pho to banh mi, to bun cha. I’m not exactly sure how the pricing works as only 3-4 of the items have a price labelled on the picture. The place still gives off an air of being brand new, hopefully the prices will be made more clear in the future. 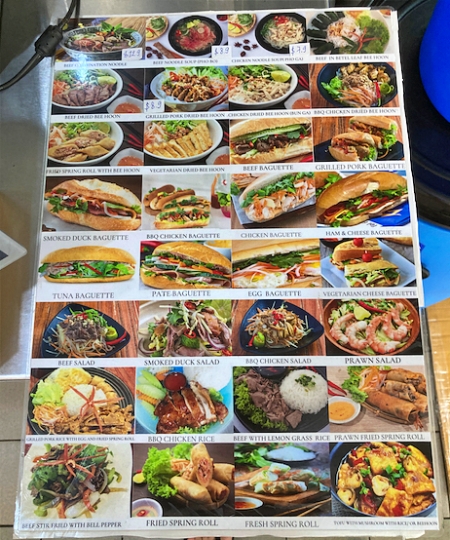 I pointed to the pho bo, one of the few items that has the price specified, $8.90. For a dish with rare beef and a soup that involves so much cooking time, for me the price is reasonable. Although, I can see how some people might consider it too expensive for a coffee shop meal, especially as it is the same price you might find in a restaurant on Joo Chiat Rd. In fact, I only had $5 on me as I was expecting it to be cheaper. Luckily the hawker has a PayNow option, or I would have gone hungry. Also not of warning, exercise patience for your food too, as he is a one man operation. 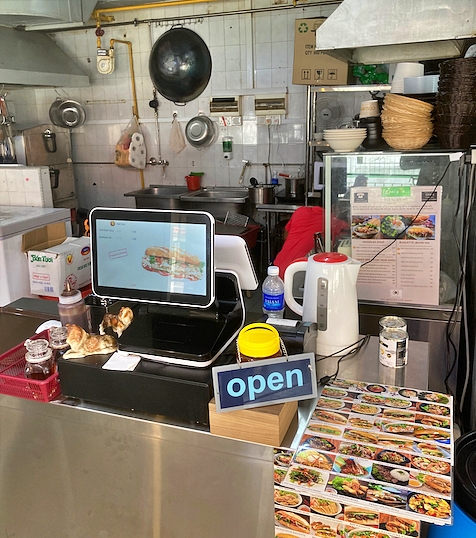 When the hawker brought it over to my table, small coffee shop with table service, the look and smell of the pho was amazing. I will admit I have a bias, as pho is high up on my list of favourite foods. This pho seems to be more southern pho than northern style, similar to what you would get served in Australia. The first taste of the soup was heavenly, the soup had the depth I was craving. However, but the second and third spoons, the flavour of freshly cracked pepper was overwhelming. Suddenly pepper was all I could taste. Sadly, this wasn’t the pho eating experience I had in mind.

The sliced raw beef was succulent, which is impressive for beef in Singapore thats not wildly overpriced. The pho also had one hand made beef ball, cut in two, that was tasty. The silky rice noodles were melt in your mouth good, my only criticism was that there was an incredible amount of noodles. Noodle lovers would rejoice, but I couldn’t finish them all. The pho was my lunch and I couldn’t afford to go back to work in a food coma. I wouldn’t have minded a bit of hoisin sauce on the side, but that’s neither here nor there.

I’m going to put my disappointment down to teething issues, there is still a lot to like about this pho bo. The flavour of soup minus the pepper was great. Anyway, it is so refreshing to see some vietnamese flavours served in a coffee shop, its a venture I definitely want to support.